The Story of a Swedish Mora Clock

I have had a love affair with Swedish Mora clocks for the past twenty years, in fact a Mora clock found in the Paris Flea Market is what inspired me to sell Swedish antiques. It was the wonderful feminine yet whimsically curvy shape and the beautiful blue/grey patina that caught my eye. After that first sighting I wanted to learn more about the Mora clock and delved into 18th century history to get the full story. 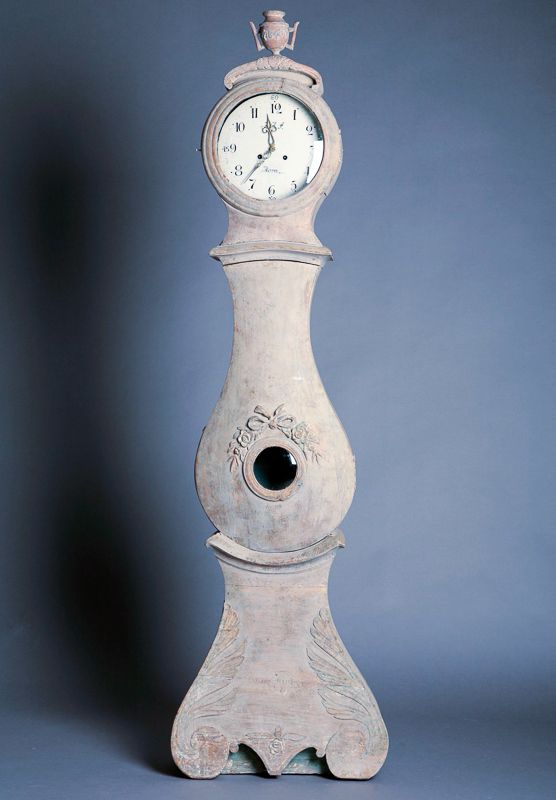 Krång Anders Andersson, born in Östnor in 1727, began the tradition of clock making in the town of Mora in the province of Dalarna. A number of artisans were involved in the making of the clocks. A clock specialist might make the works while the wooden case was commissioned by the owners and made by carpenters far and wide. Eventually the pieces came together in the finished clock, which was often signed with both the name of the maker and the owner. This very personal approach is the reason for the wide variety of antique Mora clocks, which are based around the figure eight or rounded female form.

Clocks were traditionally given to the bride on her wedding day. The decorations on these bridal clocks were very elaborate. Each clock might have wonderful carvings on the body and a bonnet adorned with carved flowers and leaves resembling a bridal crown. many clocks also had urns, fans and decorative elements.

We have always tried to have a variety of Mora clocks in the store. Recently I encountered a very special one, something that I had never seen before. It still had the curved body, but amazing cutout details of a harp and a sun on the door. I, of course, purchased it immediately and then had the long wait through the Swedish winter until it finally arrived in a very large crate at the store on a day that made us wish for spring.

We assembled this quirky clock amazed at its detailed construction, but a little alarmed that you could see-through the cutouts on the front into the interior. There hung the weights and the pulleys, a sight that is usually hidden with only a glass window revealing the pendulum. We definitely felt that a clock as elegant as this one wouldn’t reveal its inner workings in such a manner. We looked closer at the door, particularly the inside, and there was the clue, tiny little nail holes that must have supported some kind of fabric. That sent me on a mission down to the lower east side to find the right fabric. I considered a golden yellow, ugh, that didn’t work, then focused on blue which is of course the Dawn Hill color. 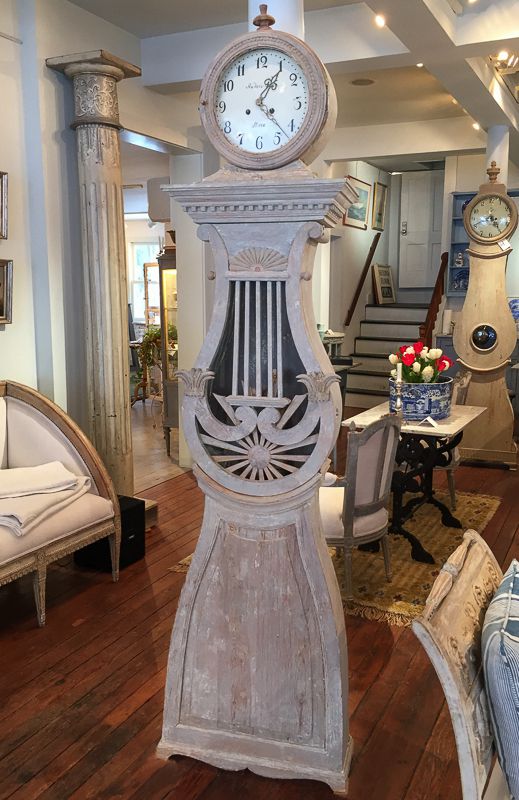 Next came a visit from Juraci our wonderful upholsterer, who instantly got the message. “PLEATS!”  he said, “YOU NEED TO PLEAT IT!” 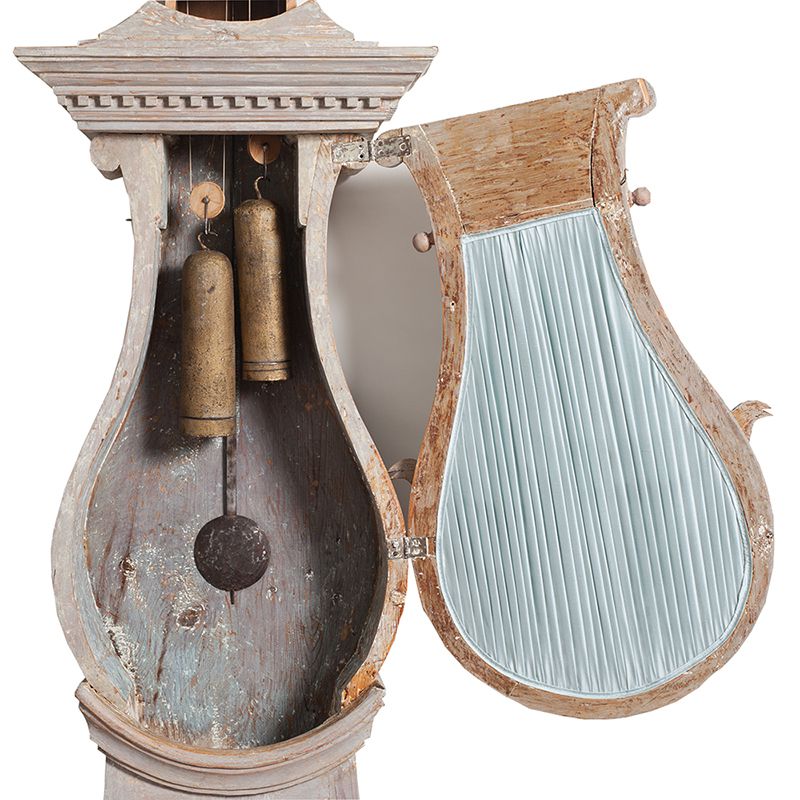 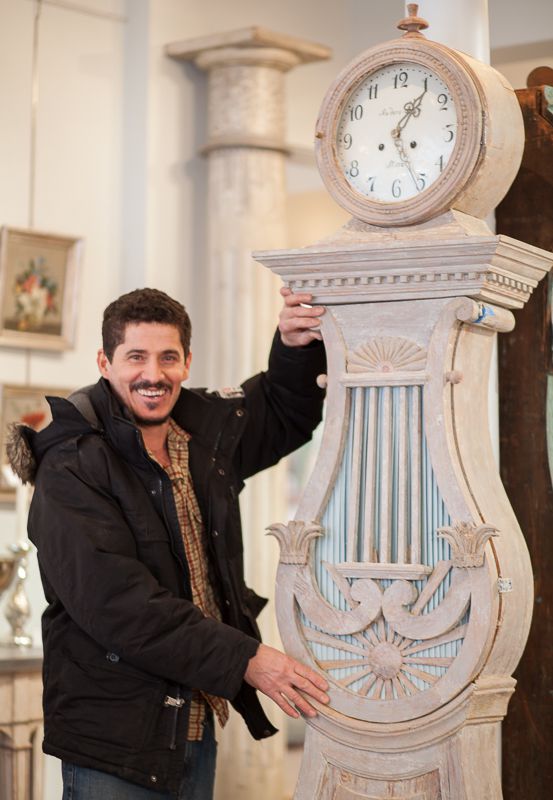 Off he went with a piece of pale blue silk and returned a week later with the perfect solution, beautiful sharp pleats fastened to the inside of the door. 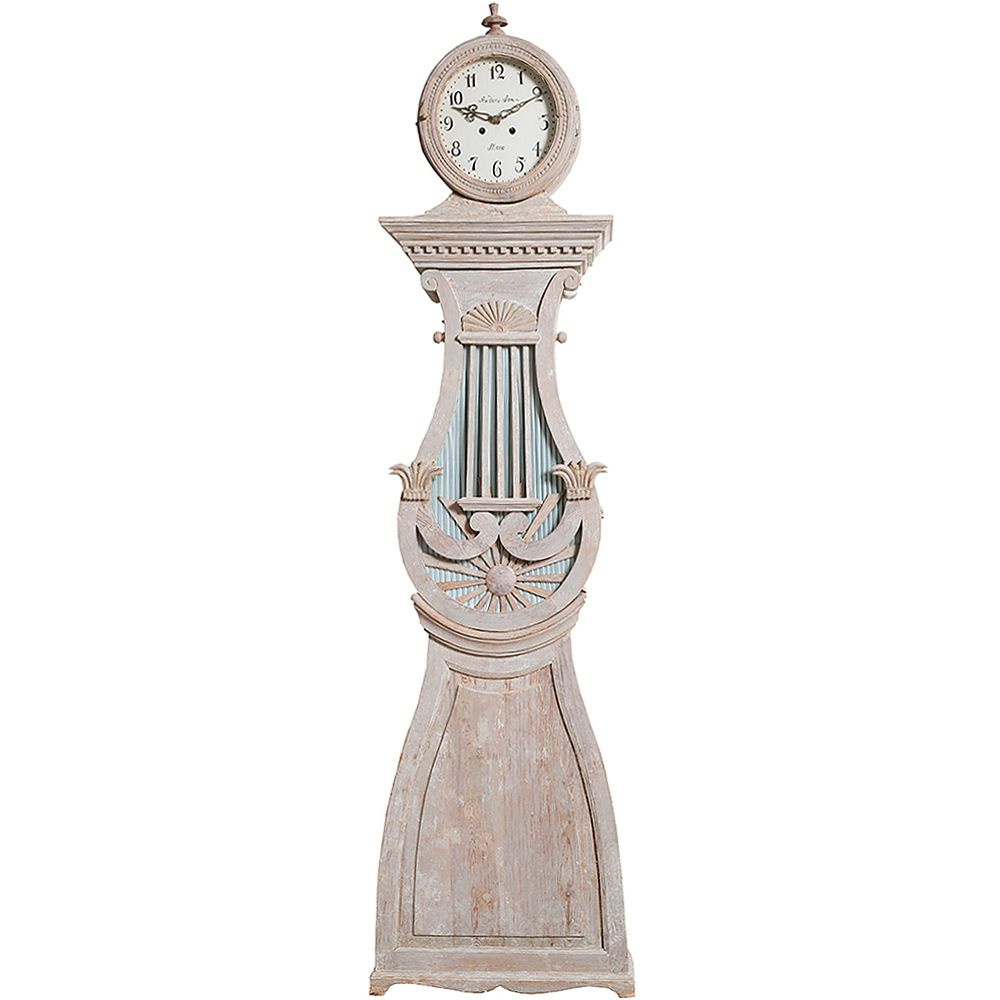 Suddenly making it the elegant clock that once stood in the great room of a Swedish manor house.

And better still, the face is signed Andersson the clock maker that started it all!