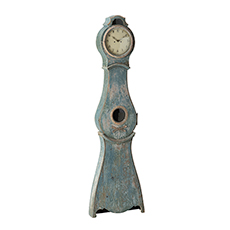 This charming Mora clock is made exceptional by small touches of details such as the emblematic carving of a dragonfly on the belly, flowing hips, and the carved dots that circle the door of the bonnet, the crest, and the glass eye for the pendulum. The paint is original, showing its age nicely with a 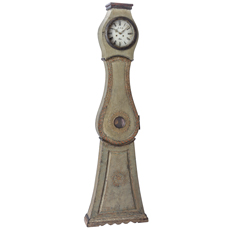 The body of this clock has been dry scraped to reveal the beautiful original grey/green paint, with details of black and oxblood red. The bonnet has had some paint restoration in the past, but the domed glass is original. There is a carved star in the middle of the lower half of the case and 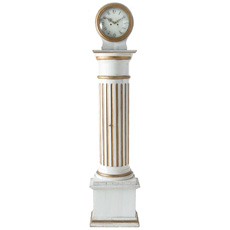 This unusual Swedish tall case clock, with inspiration from the antique Empire Period, imitates a Doric style fluted column, composed of a half-cylindrical body placed on a square base. This type of clock was often painted white with gilt embellishments, as in this example with the vertical gilt carvings. The movement chimes the hour, and 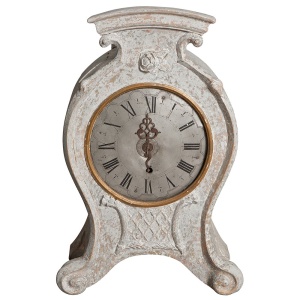 This charming Rococo period clock in the original grey paint surface is meant to have only one hand and marks each quarter hour. The handsome metal face has beautifully painted roman numerals and a brass ring around the edge. The works have been modified and changed to battery power. ref. 7-6474 $5,200 23” high 14” 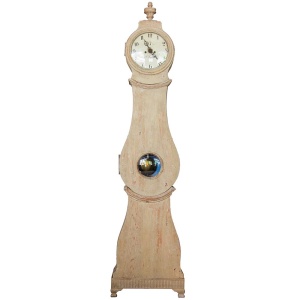 A Swedish Mora Clock with An Urn Finial, circa 1790

This Swedish tall case clock in the traditional Mora style, has an interesting movement, which includes a barely ever seen subsidiary seconds dial, as well as an alarm feature. The face is signed by the maker, N. Lundgren. The pale grey/green paint surface is original. It has been serviced & is in fine working order.