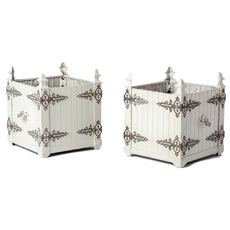 This stunning pair of cube shaped cast iron planters are all about contrast. The metal hinges have been dry scraped down to the original surface so they can show their striking detailed construction against the white painted body. The handles themselves feature floral reliefs; such effort was taken by the designers to create these unique 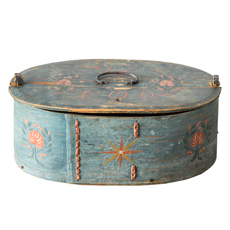 This “Svepask” or “Tine” box was made by taking a single thin piece of wood, heated and boiled, and then stretched over a mold and sewn together with wood fibers. The box was then painted and carefully decorated with flowers. The color of the decorations and lettering creates a striking visual against the blue background. 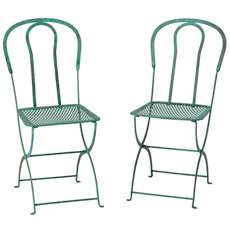 What drew us to these wrought iron garden chairs is they are surprisingly sturdy, yet are light and comfortable with Parisian flair. They have been repainted in green. The backrests are made of two pieces of flat wrought iron, joined together by a rivet. The overall form was ahead of its time, and they are 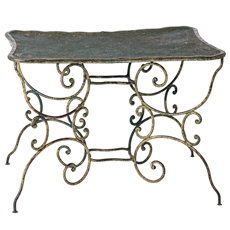 This antique French table called out to us with its unusual top; all four sides curving in creating a unique statement. The legs are sublimely shaped, with intricate scrolls of wrought iron throughout. The paint is original and wonderfully patinated. Tables like this are how France got its reputation for great metallurgy. ref. 7-8145 $3,400 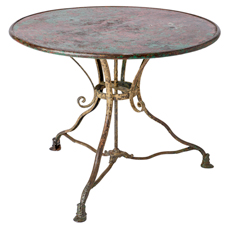 A French Round Table with Pad Feet from the Arras Foundry C. 1900

The Arras Foundry was an important producer of French artistic ironwork, so naturally when we found this table with the rare Arras label we had to scoop it up! The paint has developed a wonderful patina. Scrolling wrought iron leads to feet that end with an unusual pad shape. This table is a wonderful example 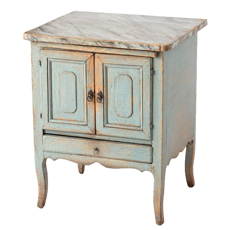 A Swedish Rococo Period Side Table or Nightstand with Faux Marble Top, C. 1780

Two doors with raised carvings open to reveal original hardware on this beautiful piece of 18th century Swedish antique furniture. The graceful legs with subtle curves are hallmarks of the rococo period. The blue paint appears to be original, is nicely worn, and is a great shade of turquoise blue. This piece will be sure 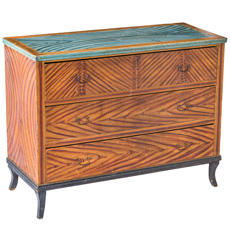 This well preserved 19th century chest from the county of Jämtland in Sweden has that “stop-you-in-your-tracks” beauty. Juxtaposing lines, and swooping half circles give a playful yet stately elegance. The Faux Bois paint, imitating natural wood grain, is original; so too is the hardware, and both are in great condition. All the drawers work nicely, 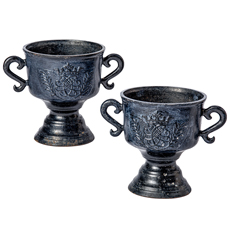 These charming urns feature an insignia of the Swedish royal crown on each side. The crown is the style used by lesser Swedish nobility, such as princesses, dukes and barons. The crown sits above a royal cypher surrounded by two leaves. The cypher would be the initials of the urns commissioner, and would show the 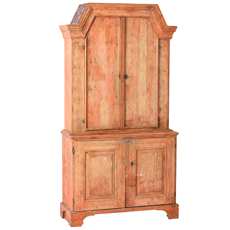 A Cupboard from Jämtland Sweden in Original Coral Paint, C. 1810

The vivid original paint on the exterior combines with beautiful details that create a piece that is a standout example of its era. Jämtland is a county in Sweden, and during the winter, its towns get an average of only four and half hours of sunshine. To combat this, the Swedes used bright and vivid 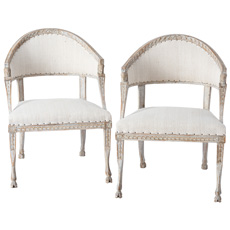 Pair of Swedish Barrel Back Armchairs in the Style of Ephraim Ståhl, Circa 1860-80

These armchairs are a testament to the work of the talented Swedish craftsmen Ephraim Ståhl. Ståhl was an Åldermän of the Stolmakareämbetet, the Stockholm guild of chair makers, from 1794 to 1820. An avant-garde chair maker at the time, he was influenced by the artifacts brought back to Sweden by King Gustav III during his