This pair of slagbord tables comes from “Augerum House,” an 18th century manor house in Augerum village, Blekinge County, Sweden.
The two tables are each complete and can be used separately, but were made to be joined together with wooden cleats resulting in a banquet table 12 feet in length seating 12 to 18 people.
Slagbord tables were used for their utility and adaptability; each table can be folded down and with relative ease moved aside when extra space is needed, for example, an after-dinner dance in the main hall.
Details abound in these pieces, take for instance the square iron bolt heads flush with the surface and the pegged joinery of the legs. On the later table, the carpenter did a masterful job replicating the period 1780 table, expertly matching patina and color. The gray paint displays a wonderful patina that only comes from over a century of use.
Notes on historical provenance follow below.
ref. 7-8215
$14,500
58.5” deep
144.5” wide
30.25” high
20″ wide when folded 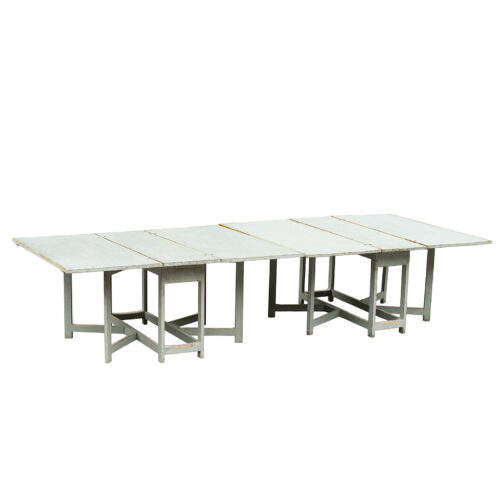 Provenance of the pair of slagbord tables from Augerum House

These twin foldable dining tables were commissioned by different owners of Augerums herrgård (Augerum Manor House).  The first of the two was made to be used in the original manor house (built in 1720).  After 140 years the second table was made, during which time there had been a change of ownership of the estate and the construction of a second building, the Stora Hus or New Manor (built 1810).  The two tables were coupled as a unit and used in the New Manor.

Augerum House (Swedish: Augerums herrgård) is a manor house in Blekinge County, Sweden. Augerum village is located north of Karlskrona.  The manor house has two main buildings, the older one built about 1720 by pharmacist Johan Eberhard Ferber (1678-1761); the newer one, called Stora Hus, in 1810 by Admiral Providence Master Carl Schweber.  In 1855, the property was bought by Chancellor of Justice Nils von Koch (1801-1881) and his spouse Frances F. Lewin (1804-1888).