This Gustavian Period commode with 3 drawers is from Medevi Brunn, Sweden’s oldest health spa and is stamped “Medevi Brunn” on the wonderfully hand-planed backboard. It used to furnish the spa’s hotel and house-villas. The piece features exceptional original metal hardware and escutcheons and has been dry scraped to its original paint on the top and deep red on the sides and front. The top also has carved corners, adding dimensionality. Useful and handsome. 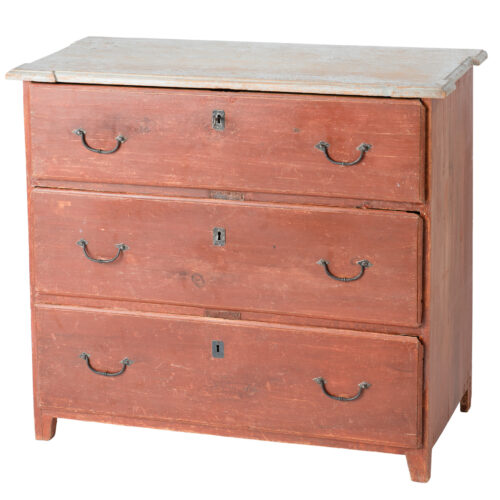 Provenance and history of the three drawer commode from Medevi Brunn.

The spa’s hotel and guest house-vilas were appointed and furnished with Gustavian furniture throughout. Beds, chairs, sofas, dressers, commodes, tables and mirrors were of a unified purposeful design. Most were painted white or off-white in keeping with the “healthy and salubrious” environment of the spa grounds.

Medevi Brunn, the health well since 1678

An authentic mineral well consisting of roughly 70 historic buildings. Here guests can live and stay all year round. Medevi is located in Östergötland near National Highway 50 between Askersund and Motala.

Medevi means “middle of the forest” and since ancient times people have visited Medevi to drink and bathe in the mineral springs here. Medevi is the oldest health well in Scandinavia with an unbroken operating history since its inception in 1678. Until the early 1980s, Medevi Brunn was run as a health resort with doctors, nurses, physiotherapists, bathers and all the traditions surrounding well drinking, morning prayers and church services, well orchestra in the park and at the head of the famous Grötlunken, theater and concerts.

The spring that is most talked about in the oldest texts about Medevi is the Red Well. It got its name from the reddish-brown ridge the water surfaced up through. During ancient times and into the Middle Ages, people made pilgrimages here in midsummer to bathe and drink the water in Rödbrunnen.

Gustav Soop (1624-1679), governor-general to Queen Dowager Hedvig Eleonora (1636-1715) and chief justice in Östergötland, had long tried to find a health spring in Sweden – like the many he visited abroad. He acquired Medevi Säteri and introduced Queen Eleonora to its many benefits. She would end up building her own depandance near Medevi.